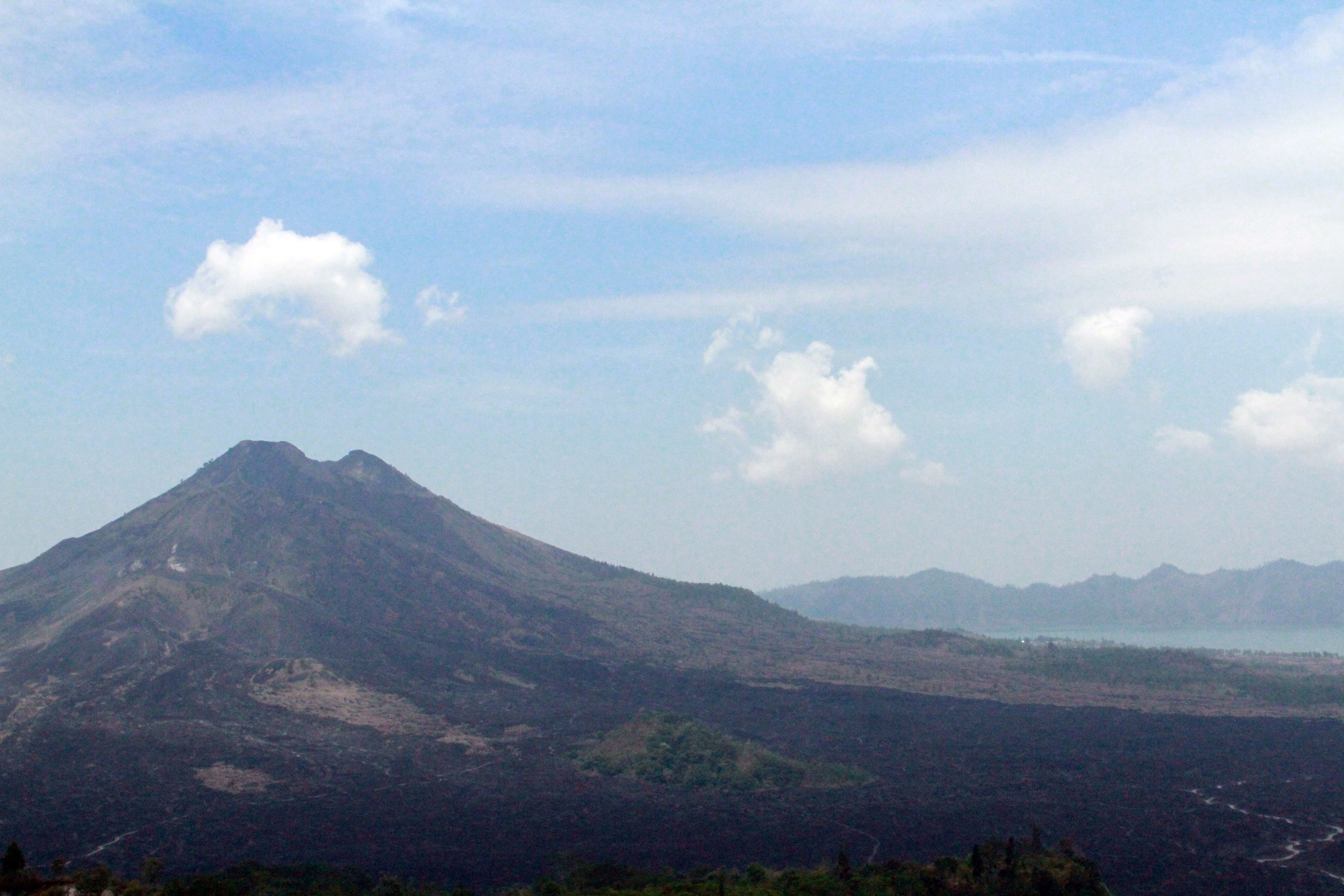 I’ve spent the last few days exploring in Sanur, Bali. It’s on the Southern bit of the island, and while it seems to be a bit of a backpacker stop, it’s not as crowded or as young of a crowd as Kuta seems to have. Having lived/been so many places, I’m honestly not that impressed by the beach, but I think the beaches are nicer elsewhere, and that Sanur has different things to offer.

First order of business was getting a massage. Massages range from $5-8 for an hour here, which is (let’s be real) the perfect price point for me. My first day in Sanur I just stumbled towards the beach in my plane-induced stupor and found the first clean-ish massage bed on the beach. As a side note: You learn to adapt your version of “clean” here. Flies are everywhere you want to eat, and a roach or two is everywhere you want to sleep. I haven’t started letting them spoon me, yet, but we acknowledge each other’s presence with a slight nod of the head now and again.

Here are some things I’ve explored in the Sanur area: 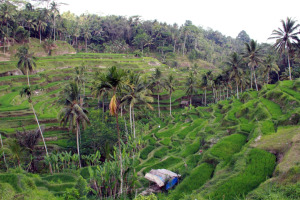 Rice fields. Man, the Balinese eat a ton of rice. Fried rice, steamed rice, rice with chicken, rice with eggs, rice with a side of rice… it’s everywhere. But the most notable thing about the rice is that it’s cared for by hand. The sprouts grow in flooded beds, before they are transferred (individually! by hand!) to the paddy (above), which is a multi-tiered field that usually has some sort of dike irrigation system in place.  When the rice plants are grown, they are cut and harvested to make up the base of the Balinese diet. 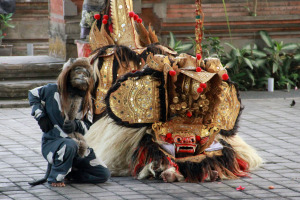 Balinese dance. The Balinese people have two traditional dances: one for the morning, and one for the evening. The morning dance explains the difference between right and wrong, and the evening dance is a story about temptation and forbidden love. The photo above is from a morning dance performance – pictured is a scene where a monkey is lending a helping hand to a tiger. The story is mostly centered around morality… 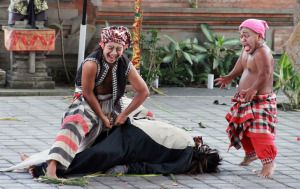 … but sometimes it is just about penis humor. Apparently many cultures find penises to be comical. They threw a little person into the show for comic relief as well. I’m not sure whether they were Westernizing the show based on what they thought their tourist audiences would like, or that people outside of America also find marginalizing differently-abled people hysterical. I find it best not to pry about these things. Although the dance performance had some elements of comic relief, the ritual itself is no laughing matter. A local man explained to us afterwards that during the fighting scenes, the dancers use real knives. Over the years there have been several deaths during performances. The Balinese believe that these deaths are caused by evil spirits entering the performance area, and hold a special prayer ceremony before every performance to protect the ensemble. 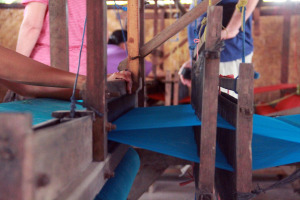 Batik. Batik is the Indonesian art of manual wax-resist patterning fabrics, and then dyeing them. There are several places to see this happening. In fact, many of the shops (well, those out of the city at least) are making their wares in the back, and oftentimes you can ask for a peek. Above is a photo of a loom – many of the fabrics are hand-woven before they are dyed. 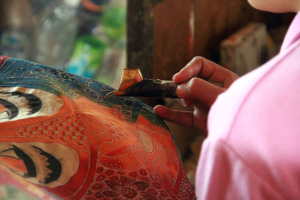 This is a picture of a nearly finished product. After the fabrics are woven, the design is penciled in. Then, one of the artists will use a thin stick (above) to drip wax along the penciled fabric to create a pattern. The fabric can be dyed before the wax is applied, for a more flowing or tie-dye look, but is bore commonly applied before the dye, to create a barrier between colors.

The women, who were sitting in a row doing this incredibly tedious work by hand for hours at a time, looked focused and unamused by our interruptions. It’s a bit difficult not to look like a gawking idiot when you are genuinely interested in something, I think. Especially when there is a language barrier that prevents the exchange of pleasantries and thoughtful questions. I’m still trying to find the balance between learning all I can and making people feel like they are in a “third-world” fishbowl. 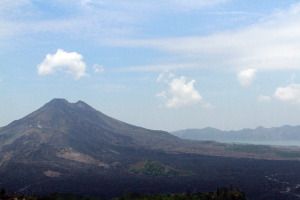 Volcano! My buddy Paige and I got to eat lunch overlooking a volcano one day. There are several hikes you can take to hike the volcano, but none more than a few hours. A proper multi-day volcano trek is on my list of things to do, but perhaps not here. It was still beautiful to look at. Out wonderful friend, Ketut, explained that the volcano has erupted once recently (within twenty years), and several times over the years (though many years ago). At the base of the volcano is a beautiful lake, and lakeside lives a native village. Ketut told us that the people of the native village, in order to discourage visitors and new settlers, have taken to not providing a proper burial for their deceased, and instead leave their bodies under trees. The trees, he explained, are so fragrant and pleasant that apparently the odor of human decomposition is not an issue. He said that the corpses also prevent people from stealing and defacing their beautiful trees. Once the bodies decompose, the bones are collected by family members and placed elsewhere. 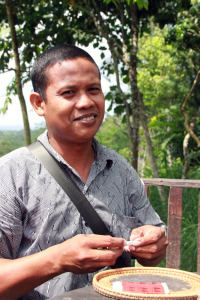 Coffee and tobacco. Here is Ketut, rolling a cigarette of Balinese tobacco. There are so many different climates and elevations in Bali that the agriculture is quite diverse. I am not a smoker, but I tried a puff of the hand-rolled cigarette. It was strong, but smooth. Still not nice enough to convince me to take it up as a habit. 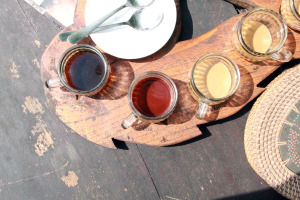 We also had a tasting of some Bali-grown coffees and teas. The ginger coffee was my favorite (ginger in coffee?!! my mind was blown), and I loved the Rosella herbal tea. Of course, we had to give to Luwak Coffee a try, being that Oprah has talked about it and all (actually, one of the coffee farmers had to tell me about that. I’m not sure I’ve ever seen a single episode of Oprah in its entirety). If you don’t know (I didn’t), Luwak coffee is supposedly the best and rarest coffee in the world, and the most expensive. At its most basic level, it’s coffee made from beans that have been shit out by a civet, and animal that looks like it’s straddling the line between a cat and a weasel. The locals call the Luwak coffee “cat-poo-chino” for the tourists, who get a big kick out of it (at least for the first six times). The idea is that the stomach acid of the animal, who feeds on whole coffee beans, imparts a flavor on the beans that is desirable. The beans are excreted whole and in the pod, and then harvested and roasted and ground by hand, like this: 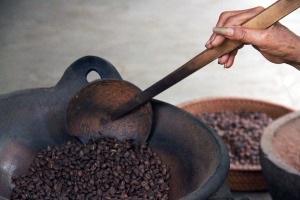 Of course, sitting in the middle of the coffee plantation, we tried it. It was, indeed, smooth. I wouldn’t call it life-changing. For those who find that disgusting, consider this: before it got called out on Oprah, the Kopi Luwak was a treat for the Balinese coffee farmers who found the Luwak excrement on the plantation. Now, the frequently-exported “treat” comes from caged civets, often kept in horrible living conditions by the hundred. If you’d like to try the coffee, might I suggest a trip to Indonesia where you can see for yourself where it’s coming from? 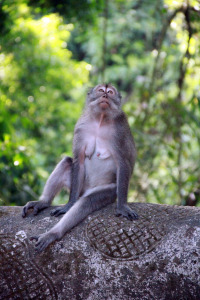 Monkeys. Monkeys are found outside of the city, as they are opposed to city prices and find it difficult to drive mopeds. We had to drive a little closer to Ubud (which is inland) to find them. Of course there is a little garden where tourists can go to see them, and they run wild and are fed sweet potatoes by visitors at their own risk. Although they run wild, the habitat is not totally devoid of Western influence… 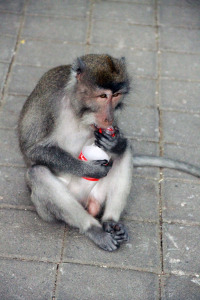 The monkeys of Ubud are known for being quite sneaky. All sunglasses and hats must be forfeited before entering the forest, lest they get stolen. Apparently someone thought his soda would be safe. NOTHING IS SAFE! It was nice to have a guaranteed monkey sighting sans-cages, in my opinion! Here is a picture of a monkey with its baby, and a fresh monkey sticking his tongue out, simply because they are adorable: 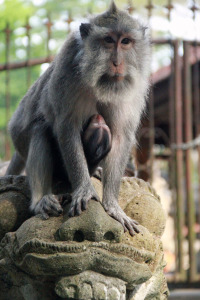 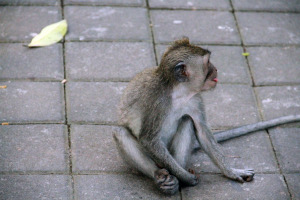 The posts will likely continue to be long and content-heavy as it is rare that I am able to find adequate internet. I have taken off from Sanur to visit the Gili Islands, a small cluster of Islands off the coast of Bali, and afterwards will likely catch up with some other friends in Amed, a black-sand beach town on the Northern coast of Bali. I will update again in a few days. I am happy, healthy and safe. I promise! Missing my home, my kitties, my fam, my friends, and my love.